We buy vehicles without warranty of fitness, cars with lapsed registration that can be re-vined (reregistered). We are willing to pay excellent money for the right car. We pay what we quote, hassle free car removals, and fair cash for car deals.

We all know that wrecked cars can be sold to auto Dismantlers for their metal content and parts. In this blog post we dig a little deeper to learn about the metal composition of cars. Beyond the value of a car for the salvageable parts, the metal content determines its scrap value and recycling stages. We explore if End of vehicles (ELVs) can be recycled for all of the metals used during production and if not what prevents us from doing so.

As of 2010 there are more than a billion cars worldwide on our roads, driveways and in our garages. The global population is increasing and that too at an increasing rate and this is likely going to result in increased demand for more private vehicles. Where ever they are for now, the one thing certain is that at some point vehicles reach their end of life and end up at your neighborhood scrap yard before being shipped overseas for further recycling and metal extraction. The car industry is one of the largest consumer of metals, primarily steel and steel alloys. Studies show that the benefits to environment and economy are substantial when scrap cars are recycled using state-of-the art techniques. A study of the car recycling process in Japan found that slightly more than 8% of alloying elements used in car manufacturing could be extracted from end of life cars. While the skeptic would point out that this still means 90% of the material would have to be dug from the ground like those mines in Australia, the 8% metal recovery from recycling is worth the effort. Quite simply because proficient management of resources is vital for realizing a sustainable society and economy in the long run. Recycling steel and iron from cars has been highlighted as an important step in CO2 emission reductions.

Vehicle recycling is complex and not cheap which is one reason why the extraction of metal from cars is not performed in New Zealand. Before the useful metals can be extracted the non-reusable parts of a car such as its air-conditioner coolants and airbags have to be separated. The copper in wires and the engine are removed and the remaining parts are shredded together to reduce the volume of scrap. It is important to separate copper as it reduces the strength of steel and is considered a contaminant. The steel that makes up a car body is not of a uniform type. To increase the proportion of metals extracted the alloys of varying composition would ideally have to be separated too. High tensile steel is used in the vehicle frame and stair less steel in the exhaust parts. Similarly the concentration of alloyed elements such as nickel, manganese, chromium and molybdenum are also different in the various car parts. 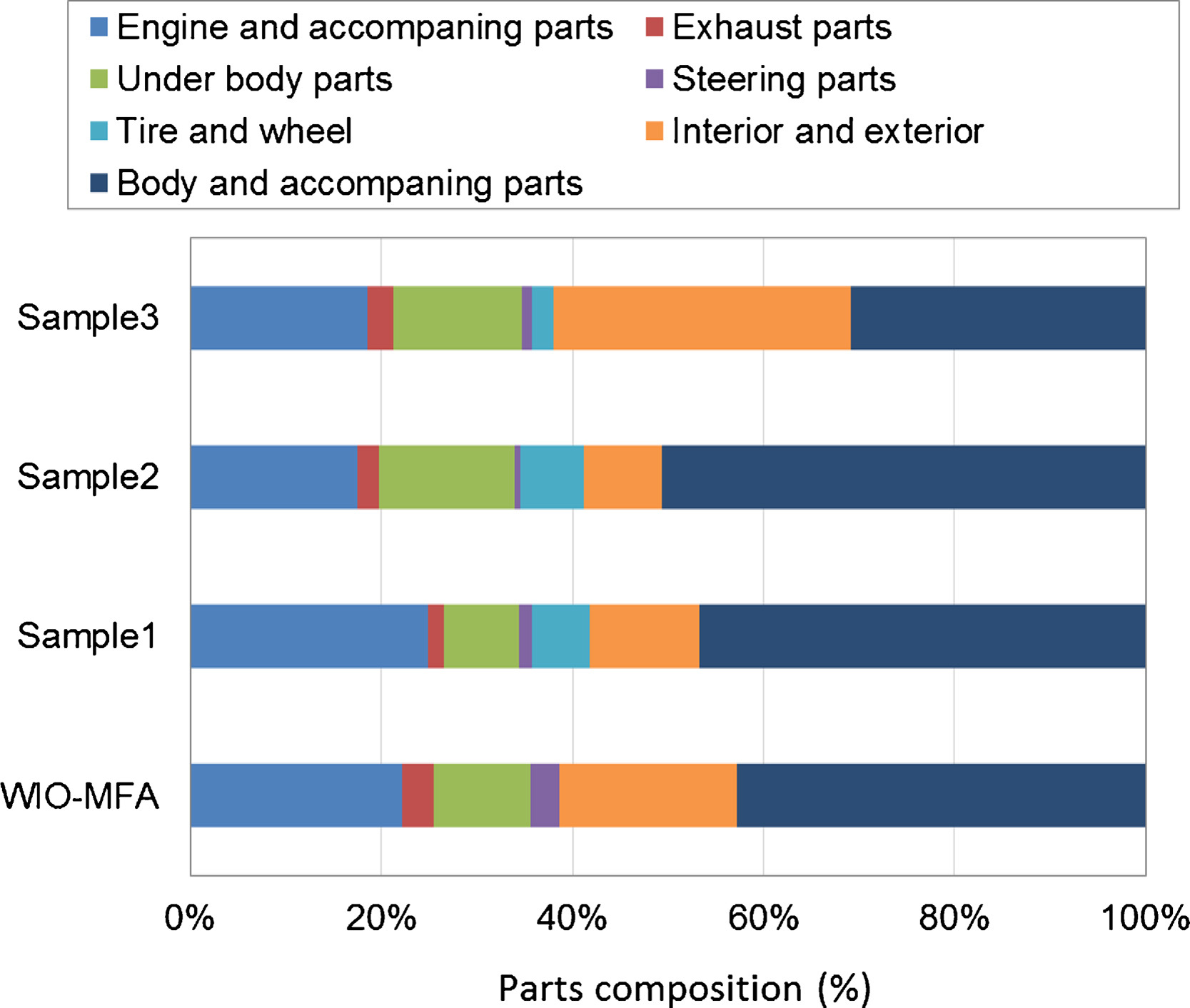 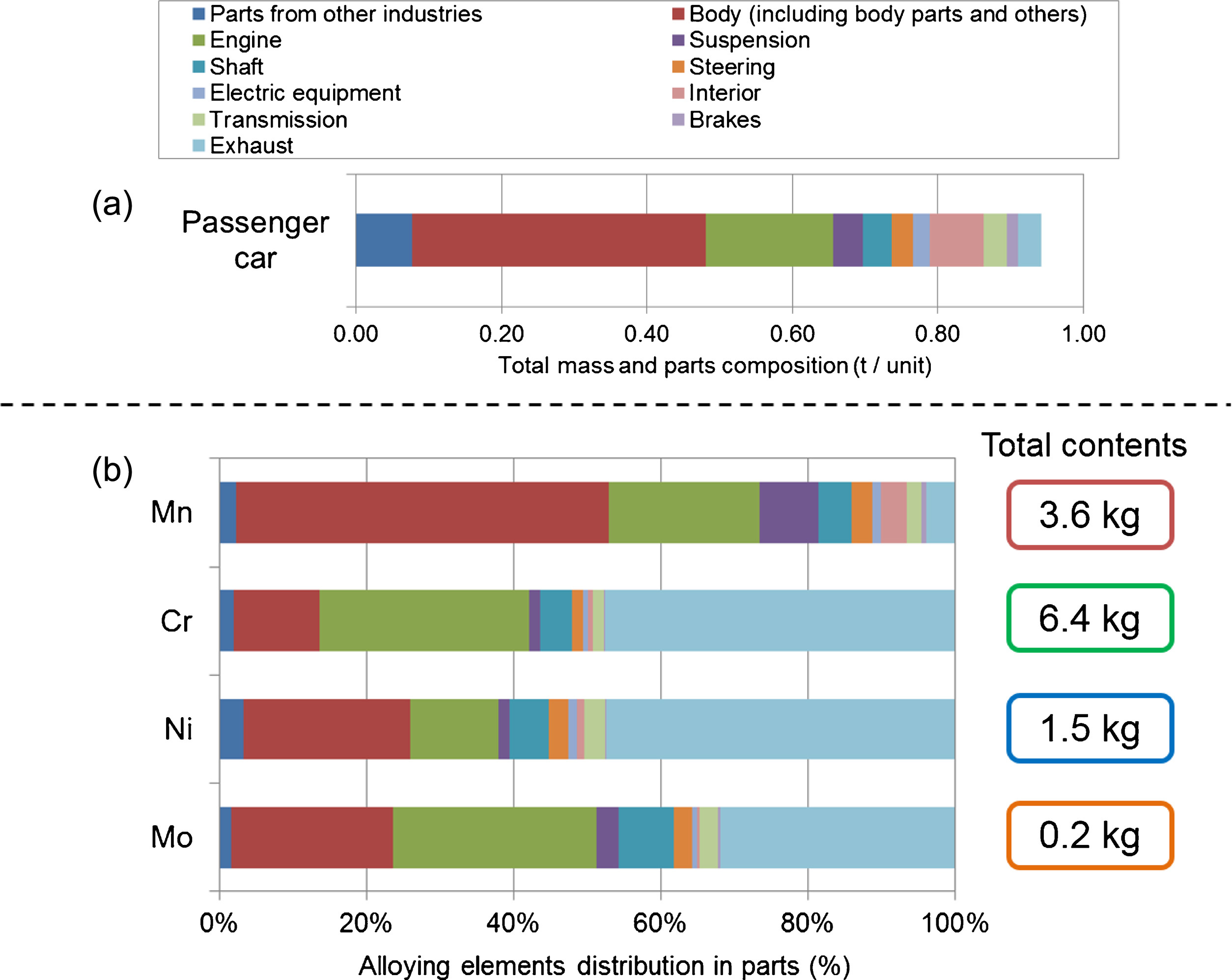 Let’s assume that a typical passenger car weighs about a ton (we can ignore the weight of tires and glass windows and windshields) then the amounts of metal that can be extracted are shown in the next figure and the table shows estimated amounts of treated scrap parts.

To summarize vehicles that depend on fossil fuels are going to be in use at least until 2050 for reasons of affordability even as electric vehicles and hydrogen fuel vehicles become more prevalent. Efficient recycling and processing of end of life vehicles can be a considerable source of metals and steel and in reaching CO2 emission targets.